Anyone who deals with PC games in 2020 will hardly be able to avoid Cyberpunk 2077. The futuristic world, a dark story and one of our favorite Reddit stars – this is how you could roughly summarize the new game from the Polish development studio CD Project RED. We’ll tell you what exactly to expect and what the Cyberpunk 2077 system requirements look like here! 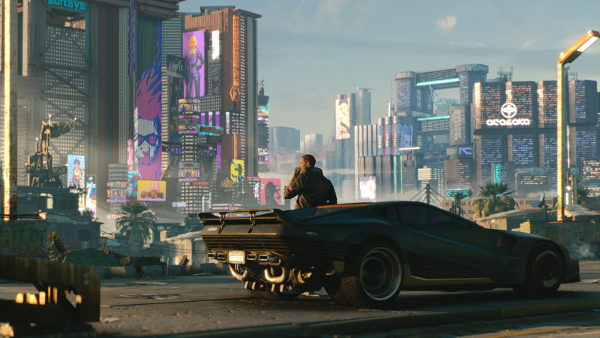 You may have already noticed that the game communities have simply not been able to sit still since 2018 at the latest. Everything now revolves around one game: Cyberpunk 2077. But why? What makes this title so special? And what is the RPG actually about? We clarify!

A true classic in a new format

Did you know that the story of the new computer game actually began over 30 years ago ? This is based on the Neuromancer trilogy, a book series by the author William Gibson. Based on this, the pen and paper “Cyberpunk 2013” ​​appeared in 1988. The story is considered to be the basis of today’s cyberpunk genre and is now finally being brought to the PC.

But let’s stay a few moments in the past for now. Because in order to understand the hype surrounding the PC game, we should deal with the original story . Even then you could really feel the dark mood while reading. The main characters were all figures from the underworld: a hacker who can no longer dive into the online world, a hit man and an ex-special forces officer to be precise.

If you combine that with various body modifications, cyborgs and technology that will be centuries away, you get a story that is absolutely gripping. But what makes it all more exciting? Immerse yourself in this fascinating world and become part of it! The author initially achieved this with the pen & paper role-playing games “Cyberpunk 2013” ​​and “Cyberpunk 2020”. It can only get more realistic with a computer game and it will finally be released – hopefully – on November 19, 2020.

A ticket to the future, please: Cyberpunk 2077

But let’s now turn to the story of the new game. “Cyberpunk 2077” takes place 57 years after the last pen and paper. As in the expansion of the game at the time, we dive into Night City, a futuristic, fictional city in California. There is constant unrest in the metropolis, because the law has long ceased to be in power here.

Instead, it’s big collaborations and gangs that control life and the streets. No wonder that the residents hardly ever leave the house unarmed – after all , danger lurks around every corner. You yourself will slip into the role of mercenary V. Once you’ve chosen your backstory and customized your character the way you want them, your adventure begins.

In the course of the game you embark on different missions, explore the black markets and take on the military. The gangs are not safe from you either – your mission is only one: immortality. Because this promises a special implant that you are looking for. Various modifications, accessories and items will help you achieve your goal. But in the end it is up to you as a player whether V achieves his goal!

A closer look at the gameplay

While the story is undoubtedly an important part of the game and contributes significantly to its success, there is a lot more behind Cyberpunk 2077. Because PC Project RED seems to have understood the success concept and has designed a game that shines with a truly unique gameplay .

Basically, this is first of all an RPG that you can play in single-player as well as online in multiplayer. All doors of the Night City open world are open to you. You can explore a total of six different regions and constantly meet new characters. According to The Witcher 3 principle, you can even enter into relationships with the NPCs and write your own stories.

Speaking of The Witcher: The ultra-popular video game series actually comes from the same company. You may already know the unbeatable graphics , the detailed textures and the unique overall gaming experience – the new game should be based on it and improve it even further. So it’s no wonder that the community can hardly wait for the release, but at the same time fears the Cyberpunk 2077 system requirements!

The way the game is programmed, you can certainly imagine that it will not make low demands on the computer. The worst fears that circulated in the room after E3 2019 have now been refuted. So you can take a deep breath before we want to take a closer look at the Cyberpunk 2077 system requirements together. Then we will also tell you which hardware you really need.

The non-plus-ultra of the demo version

The new game was shown for the first time as a demo version at E3 2019. While many players’ hearts beat faster at the pure sight, other dreams seem to burst. Because this version of the game ran on an absolutely high-end computer , as was later leaked by an employee of the project. Specifically, this means:

This setup would cost a good 3,600 euros according to current standards (as of September 2020) . The graphics card alone accounts for around two thirds of the price. There is no question that the average Otto can or will hardly afford this. It’s good that the actual Cyberpunk 2077 system requirements have now been announced. You will see that thanks to the staggering, the parts can be quite affordable.

Of course, it’s hard to give you recommendations for your actual build before the game is even available on the market. But according to the specs that we have so far and what the manufacturer has already announced, we can at least give you any guideline values . The Cyberpunk 2077 system requirements for 1080p to 1440p are around:

With these specs you should easily get under 1000, – € for a new computer . But if you have the budget, we would always recommend future-proofing. This also means choosing the newer generations, especially for these three components. So you can safely play the successor to Cyberpunk 2077 without any problems.

Do you want to play cyberpunk with the best graphics ever? Do you want to completely immerse yourself in the gaming experience and enjoy the new world to the fullest? Then it is time to upgrade. You don’t have to recreate the setup of the E3 to do this – although that’s always an option, of course – but it can be a little cheaper.

It is best to use a processor of the latest generation to meet the Cyberpunk 2077 system requirements for the ultra settings . Specifically, this means the Intel i9-9900K or the AMD Ryzen 9 3900X. 16 GB should still be absolutely sufficient as RAM, but you can of course also install four 8 GB bars or two 16 GB versions.

Instead of the graphics card, which costs more than € 2000, we would recommend the NVIDIA RTX 2080 Ti. This monster brings an absolute top performance and will surely be more than enough for the new game. With this you are without question future-proof.

What else do you need

Cyberpunk 2077 brings with it a new standard for the gaming industry, that much is already clear. The ultra-realistic graphics, the detailed artwork and the unique concept naturally also require the appropriate performance. While a large part of this is covered by the processor, graphics card and RAM, the other components must also be coordinated with them.

For example, the first fear was that the game would require 200 GB of storage space if it was reinstalled. This rumor has since been refuted by PC Project RED. Instead, you should calculate with around 70 GB . In addition, at least Windows 7 is required, but it is actually designed for the current Windows 10. The mainboard and power supply must of course also be coordinated with the remaining components. But as I said: If you don’t necessarily want to play the game in 4K, your current setup will definitely not be a problem!