Have you ever opened your case shortly after working on it for a long period or playing a particularly powerful game? Then you have probably noticed that a large amount of heat has accumulated in the interior . Suitable case fans are required so that this does not damage your hardware or your computer even crashes because it overheats. You can find out from us what they really have to be able to do, how many you need and what else you should pay attention to! 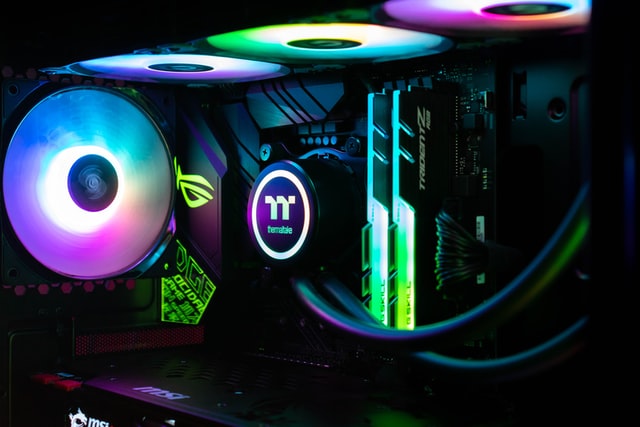 Before we go into more detail about the actual specifications that your case fan should meet, we first want to build up a basic knowledge. Because while you probably realize that the little helper’s job is to keep your computer nice and cool, there is a lot more interesting to learn.

The structure of a PC fan is actually very simple: It consists of a small fan that is clamped into a frame. As a rule, you will find standardized sizes here, so that the perfect model is available for every case. Once used, they then suck in the warm air from the interior and release it to the outside world. The whole thing is controlled by an electric motor, which is usually supplied with power directly via the power supply unit.

This can lower the operating temperature of your hardware . This not only protects them from overheating or even a possible total failure. Effective case ventilation can also help increase the overall performance of your PC. Because no matter how high-end your graphics card and processor are: If the cooling is not right, you will never be able to exploit the full potential.

Your New Pc Gaming Setup | What Shouldn’t Be Missing?

PC fan types – or: what you really need

While case fans are always the same in structure, they differ in a few other ways. Above all, the size should be mentioned here. Because this is crucial to ensure that your dream model really fits into your computer later on. You should also pay attention to the parameters of the airflow and the connector. It is more like a gimmick, but it is hard to imagine a modern gaming PC without LEDs – you will now find out what you need to pay attention to with all these points!

The fan size: the bigger the better?

The size of case fans is usually specified in millimeters and ranges between 80 and 230 mm . So you can see: the range is huge, so it is not always easy to find the right one. Basically, your choice is initially limited by your case. Because if you don’t want to tinker with it yourself, you can use the devices provided here as a guide. By the way: Are you interested in case modding? Then take a look at our post on the topic , there you will find helpful information!

Most computer cases allow fans between 120 and 140 mm – so these are also the most popular models . For a mini PC, on the other hand, 80 mm is preferred and 230 mm for the large tower. If you are not sure which size is possible for you, it is best to look at the manual or simply put the ruler in the appropriate place yourself.

Do you have the choice between different sizes, or do you want to buy a new case anyway, then we recommend a variant with a larger diameter. Because the longer the fan blades , the more air they can transport away and the more efficient they are. However, you should be aware that the better performance often goes hand in hand with a higher noise level – but more on that below.

The air throughput: how much does the fan do now?

The performance of a PC fan can of course not only be determined by its size. Rather, this is just one of the indicators alongside the engine power and the condition of the blades. However, to give you a good impression of the efficiency, an indication of the airflow rate is given. This describes the amount of air that is carried into and out of the computer per second.

In Germany and most other European countries, this information is given in cubic meters per hour (m3 / h). For a powerful gaming PC, values between 150 and 200 m3 / h are ideal. However, if you want to order your case fan in the USA, you will likely encounter the unit cfm – this stands for cubic feet per minute. You can roughly convert that with the factor 0.589 (i.e. 1 m3 / h = 0.589 cfm). A comparable fan should move between 90 and 120 cfm.

The plug: how much control do you need?

Of course, your fan must not only your body but also to the motherboard compatible to be. Because this is how it is ultimately controlled. There are different connections that give you different degrees of control over your model. Especially in gaming PCs, you should make sure to use at least a 3-pin model.

While the first and second pins are essential for the fan to work at all, the third, optional pin allows you to adjust the rotation speed . So if the whole thing is too loud for you, you can simply turn it down. If you then need more power again, you turn it up again. You can do the whole thing either directly via the BIOS or via special software.

While this acceleration or deceleration is done with a 3-pin case fan via the voltage (i.e.: the less voltage, the slower the rotation), this is different with the 4-pin model. The fourth connector sends small impulses that ultimately ensure that a fan turns faster or slower. The voltage remains the same all the time. This has the advantage that the fans don’t ever go out due to a lack of voltage.

Basically, installing the case fan is quite easy . Because here you have – at least if you buy a finished case – prefabricated cutouts into which the component must be inserted. There should also be small bases on which the fan can then be screwed. Of course, the whole thing is even less complicated if there are flaps instead into which it is simply clamped.

Now it’s a matter of getting the airflow right. For optimal circulation , the fans on the opposite side should work in the same direction. This means, for example, that the one at the front draws in air and the one at the rear releases it back outside. The same applies to fans on the top and bottom.

So that you don’t have to try out in which direction the fans actually turn, there is a label on the frame of almost all models. A small arrow here shows the direction of the airflow . According to this you screw your fan in the right place and plug the pin on the mainboard. The connection should be written out with the designation FAN. If you are unsure, it is best to take a look at the manual.

Are you now wondering how many fans you really need? That depends entirely on your components and the use of your PC. Because an office computer can usually get by with two fans that form an airflow. A gaming computer, on the other hand, easily relies on up to ten. While this is a bit overkill for most, your best bet is to use a good median of five to six.

The system is supplemented by special cooling systems for the graphics card and the CPU – these are particularly predestined for overheating. Here you can also rely on water cooling instead of an air variant. We have explained to you what the advantages of this area in a separate blog post .

By the way: Is your PC fan too loud for you? Then, as already mentioned, the best way to solve this is via the speed setting (if you have chosen a 3 or 4-pin model). If the PC then gets too hot, it can be helpful to divide the power over several fans, i.e. to upgrade here and let all run at a slower speed. Alternatively, you can also install smaller versions, because these are also quieter overall. Whatever you choose, always make sure that all of your components are well cooled. You can also check the temperature in the Task Manager.

Contents hide
1 Case fan: the basics
2 PC fan types – or: what you really need
2.1 The fan size: the bigger the better?
2.2 The air throughput: how much does the fan do now?
2.3 The plug: how much control do you need?
3 Installing the case fan: no rocket science
4 A coherent overall system